From a NARA Announcement:

Motion picture preservation experts at the National Archives and Records Administration (NARA) have authenticated 1908 footage of a Wright Flyer test flight as the earliest known U.S. government film held at the agency.

A film of the early aircraft at the Fort Myer military facility in northern Virginia, now called Joint Base Myer–Henderson Hall, was originally believed to be from 1909. A close examination by staff revealed that, in fact, some footage in the reel was of flights made the previous year.

“We were delighted to find that the 1909 film contained September 1908 footage mixed in, meaning the oldest U.S. government film we know of and hold at the National Archives was almost a whole year older than documentation indicated. The footage gets used all over the place, and the 1909 date is usually on it,” said Heidi Holmstrom, a motion picture preservation specialist with the agency. “We can now say we’ve definitively identified footage shot in both years.”

Along with colleague Audrey Amidon, the pair documented the process in a post on The Unwritten Record, NARA’s blog dedicated to special media holdings. Read the full account in “The Wright Military Flyer Soars on Celluloid: Uncovering the Story of Our Oldest Government Film.”

The film they analyzed, First Army Aeroplane Flight, Fort Myer, Virginia, is part of the Historical Films Series of the U.S. Army Signal Corps and was digitized several years ago.

When NARA staff began working from home at the beginning of the COVID-19 pandemic in 2020, Holmstrom and Amidon revisited records they were curious about. They scrutinized the Wright Flyer film and scoured related records.

As Holmstrom writes in the blog post, a note in pencil on a paper production file for the 1909 film that read, “Winfield Scott Clime s’posed to be photographer,” along with how the film is edited, hinted at possible misdated footage.

“That’s when we started asking the questions,” Amidon said. “But it wasn’t until we could get back into the College Park building and look at the still photos that we could really figure out if there was anything to our hunch about the spliced film footage.”

The film rolls accessioned by the Archives are copies of the nitrate originals, which were flammable. The only available copies removed specific identification like edge markings, splices, or perforations that could have helped preservation experts discern differences between the footage sooner.

With the help of NARA’s Still Picture Branch staff, NARA’s Motion Picture Preservation Lab determined that the film’s editors spliced together footage from 1908 and 1909 to look like part of the same 1909 flight.

Comparing the film and still images revealed a key difference: the 1908 model of the airplane has a single crescent of canvas on the front elevator of the airplane, while the 1909 model has two.

“We’ve had the recordings all along; it was right in front of us. We just didn’t have the proof that there was earlier footage included. Now we do,” Amidon said. 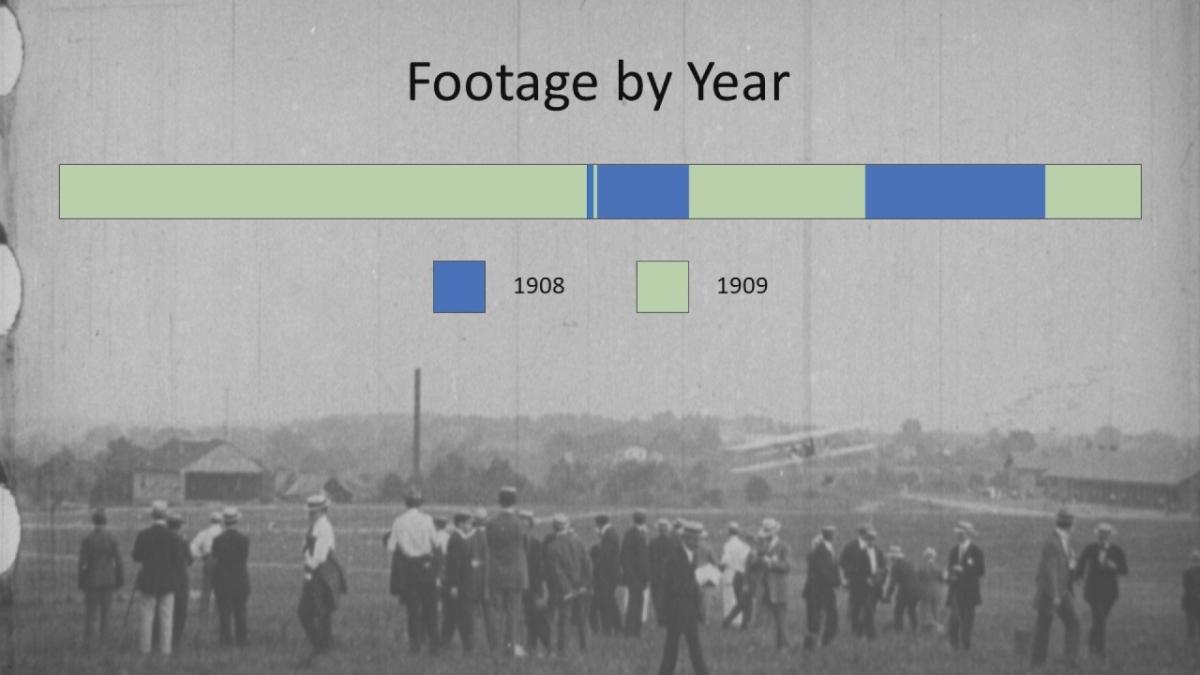 In this illustration, specialists with the National Archives Motion Picture Preservation Lab show which parts of the Wright Flyer film were definitively from 1908 tests flights and which were filmed the following year.

The films document the beginnings of the U.S. military’s aviation program.

In 1908, Orville Wright tested the aircraft for military personnel at Fort Myer. During one of those flights in September, with Lt. Thomas Selfridge as a passenger, the plane crashed as they flew around the base.

Selfridge died at the base later that day of his injuries, becoming the first U.S. military aviation death.

Orville and Wilbur Wright sold the plane to the U.S. government in 1909, when Fort Myer would become the site of the first official military aviation flight.

“We’re proud to add another ‘first’ to our base’s history after learning the 1908 recordings of the Fort Myer test flights have also been authenticated as the first official government film known to exist,” said Col. David Bowling, Joint Base Myer-Henderson Hall Commander. “The Wright brothers’ test flight here at Fort Myer in 1908 is such an important part of the history of the joint base, as well as of military aviation. To know that this video has been authenticated and to be able to say ‘that’s Fort Myer’ is incredible.”