Year-over-year e-book sales in the United States declined by 5 percent, with 55 million units sold through April 2020. However, unit sales in April 2020—the first full month of COVID quarantine—rose by nearly one-third (31 percent) compared to March 2020. All major categories experienced e-book growth in April 2020, compared to previous month, with adult fiction posting the largest unit gain of 1.8 million units, according to The NPD Group.

Traditionally published e-book sales volume, tracked by NPD PubTrack Digital, declined 6 percent in the first half of the year. However, looking only at the month of April— the first full month of COVID-19 lockdowns in the U.S.—e-books were up 31 percent compared to March, selling 4.2 million more units.

“With brick-and-mortar retail bookstores shut down in the U.S. this spring, the e-book format became more popular during the COVID-19 crisis,” said Kristen McLean, books industry analyst for NPD. “They’re easy to purchase, can be read instantly after being downloaded, and eliminate any concerns over infection or availability.” 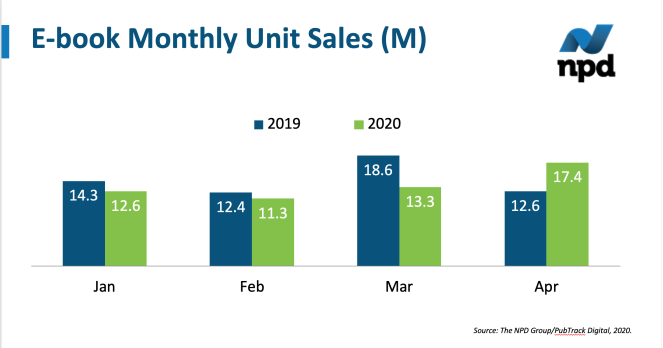 Sales growth for adult e-books was led by general fiction, which rose 23 percent in April compared to March according to NPD BookScan. The leading general fiction title in April was “Little Fires Everywhere,” by Celeste Ng, propelled by the popularity of the Hulu adaption released in March 2020.  The romance category posted 22 percent growth in April compared to March, led by “First Comes Scandal,” by Julia Quinn.

Children’s e-books declined 12 percent over the first half of the year, with 5.1 million units sold. However, children’s fiction grew 78 percent in April over the previous month, as children’s non-fiction grew 39 percent. General fiction experienced highest unit growth in April, up 72 percent versus March, driven by top growth titles like, “The Bad Seed,” by Jory John, and the “Pete the Cat” series, by Dean James.

Young adult e-book sales grew 10 percent over to 2019, driven largely by double-digit increase in fiction sales. The science fiction category enjoyed the highest unit-sales gain, led by “The Hunger Games,” by Suzanne Collins, and “The Hobbit,” by J.R.R. Tolkien.