New Report From Pew Research: “Bots in the Twittersphere” (Two-Thirds of Tweeted Links to Popular Websites are Posted by Automated Accounts, Not Human Beings)

A large share of tweeted links to digital content are generated by bots – that is, by automated accounts that post content or interact with other users with no direct human involvement. A new Pew Research Center analysis of 1.2 million tweets finds that 66% of the tweeted links to content on popular websites are posted or shared by bots.
The analysis focuses on links to 2,315 popular websites across a range of subjects, including sports, commercial information, celebrities, news and sites created by organizations. Among popular news and current events websites, 66% of tweeted links are shared by bots – similar to the overall share of bot-created links to every kind of popular site. The proportion of bot-shared tweeted links varies depending on attributes of different news and current events sites. For example, 89% of tweeted links to aggregation sites – sites that compile stories from around the web – are posted by bots. 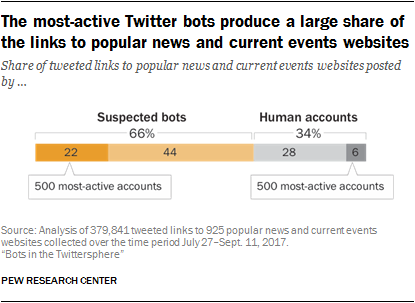 The findings emerge at a time when the role of bots in promoting web material has been swept into the debate over Americans’ changing news habits, the tenor of online discourse and the prevalence of “fake news” online. This analysis provides new evidence about the scope of bot activity across the Twittersphere. At the same time, it does not address the accuracy of the material shared by bots, and makes no assessment about whether the bots are “good” or “bad” or the degree to which the public engages with bot-generated material.
“These findings illustrate the extent to which bots play a prominent and pervasive role in the social media environment,” says Associate Director of Research Aaron Smith. “Automated accounts are far from a niche phenomenon: They share a significant portion of tweeted links to even the most prominent and mainstream publications and online outlets. Since these accounts can impact the information people see on social media, it is important to have a sense their overall prevalence on social media.” 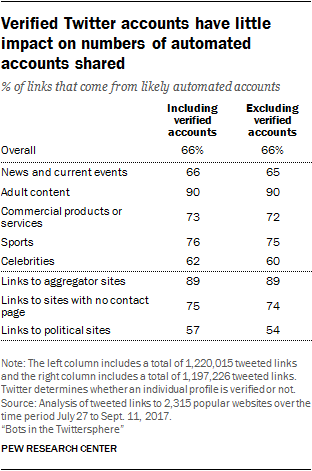 Pew Research Center used a number of computational techniques to perform this analysis. Researchers collected 1.2 million tweets containing links during a 47-day period in the summer of 2017. They analyzed 2,315 of the most popular websites as determined by the number of links to a particular site’s content. The Center used a tool called Botometer to analyze each link and determine if it was posted from an automated account. Botometer is an automated tool developed by researchers at the University of Southern California and Indiana University that estimates the likelihood that any given account is automated or not based on a number of criteria. Accounts estimated as having a relatively high likelihood of being automated based on Pew Research Center’s tests of the Botometer system were classified as bots for this analysis. 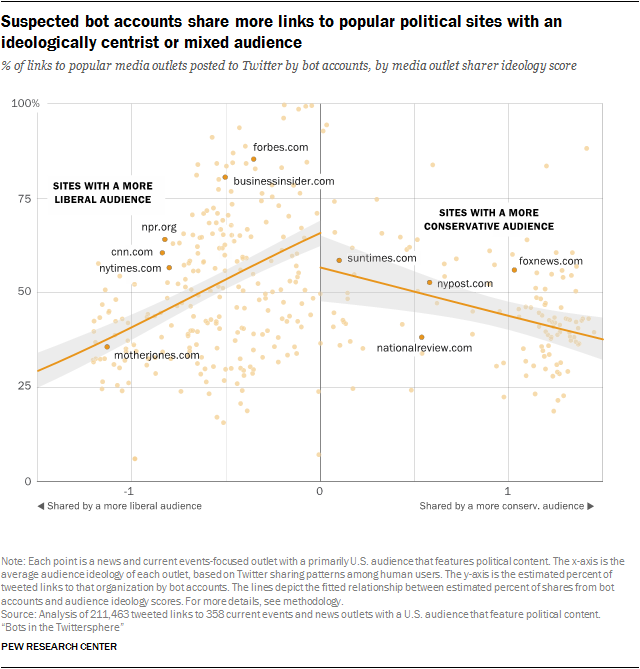 Certain types of sites – most notably those focused on adult content and sports – receive an especially large share of their Twitter links from automated accounts. Researchers categorized sites into seven different groups: adult content, sports, celebrity, commercial products or services, organizations or groups, news and current events, and tweets with links to other material on Twitter. Automated accounts were responsible for an estimated 90% of all tweeted links to popular websites focused on adult content during the study period. For popular websites focused on sports content, that share was estimated to be 76%.
Among popular news and current event websites, 66% of tweeted links are made by suspected bots. The share of bot-created tweeted links is even higher among certain kinds of news sites.
A relatively small number of highly active bots are responsible for a significant share of links to popular news and current events sites. This analysis finds that the 500 most-active suspected bot accounts are responsible for 22% of tweeted links to popular news and current events sites over the period in which this study was conducted. By comparison, the 500 most-active human users are responsible for a much smaller share (an estimated 6%) of tweeted links to these outlets.
The study does not find evidence that automated accounts have a liberal or conservative “political bias” in their overall link-sharing behavior. An analysis of a subset of news and current events sites that focus on political content found that suspected bots share roughly 41% of links to political sites whose audience is primarily conservative and 44% of links to political sites whose audience is primarily liberal – a difference that is not statistically significant. By contrast, suspected bots share 57% to 66% of links from news and current events sites whose audience is ideologically mixed or centrist.
“What we can’t say from this study is whether the content shared by automated accounts is truthful information or not, or the extent to which users interact with content shared by suspected bots,” says Computational Social Scientist Stefan Wojcik.

Filed under: Associations and Organizations, News, Patrons and Users, Reports