The Pew Research Center released their latest “Americans and Cybersecurity” report today.
As we’ve said many times on infoDOCKET, digital privacy awareness (all aspects, from library databases to social media) and education is an opportunity for all libraries and librarians to share knowledge about an important, relevant, and dynamic topic with the many communities they serve. The fact that many people (library users or not) have said they trust libraries/librarians can only help us in this role.
We’ve noted the one mention of libraries in this report.
From the Report:

..the Center conducted a national survey of 1,040 adults in the spring of 2016 to examine their cybersecurity habits and attitudes. This survey finds that a majority of Americans have directly experienced some form of data theft or fraud, that a sizeable share of the public thinks that their personal data have become less secure in recent years, and that many lack confidence in various institutions to keep their personal data safe from misuse. In addition, many Americans are failing to follow digital security best practices in their own personal lives, and a substantial majority expects that major cyberattacks will be a fact of life in the future.
A majority of Americans (64%) have personally experienced a major data breach, and relatively large shares of the public lack trust in key institutions – especially the federal government and social media sites – to protect their personal information.
[Clip]
The survey also finds that Americans are not always vigilant in the context of mobile security. For instance, 28% of smartphone owners report that they do not use a screen lock or other security features in order to access their phone, while around one-in-ten report that they never install updates to their smartphone’s apps or operating system. Meanwhile, 54% of online adults report that they utilize potentially insecure public Wi-Fi networks – with around one-in-five of these users reporting that they use these networks to perform sensitive activities such as e-commerce or online banking.
[Clip]
More than one-quarter of smartphone owners do not use a screen lock, and many fail to regularly update the apps or operating system on their phones.

Along with users’ passwords and the physical devices they carry, the networks their devices are connected to offer an additional avenue for potential cyberattacks. Public Wi-Fi networks (such as those in cafes, libraries or other public spaces) are an especially common target for hackers. The mechanics behind these attacks vary, and not all public networks are inherently insecure. But in general, security experts recommend that users refrain from performing sensitive activities (such as banking or financial transactions) on public or otherwise unfamiliar Wi-Fi networks. 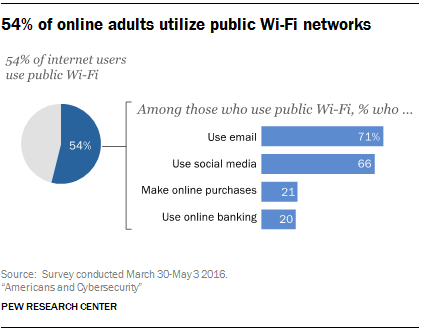