Delta Think Reports on “The Impact of Transformative Agreements on the Value of the Big Deal, Part 1: Methodology”

From a Delta Think “News and Views” Post by Heather Staines:

This month’s News & Views is derived from ongoing research involving Michael Levine-Clark, John McDonald, Jason Price, and Heather Staines. This content, and the planned May News & Views, is based on a session presented at the Charleston Conference in November 2021.

How does the growth of a particular publisher’s open access content factor into the relative value of a Big Deal?

As open access publishing has grown, libraries have begun to question the value of their expensive Big Deal subscriptions. Data from Delta Think show that OA articles account for an increasing percentage of overall publishing. This study examines those data as well as usage data from library subscriptions to determine whether the overall value of Big Deals is decreasing. Included in this study is a detailed explanation for how to remove outliers to create a more reliable data set – an important component of any study, and one that could be used by librarians who wish to perform a similar analysis on their own collections. Part 2 (to be published in the May News & Views) will include the findings of this study, which are informed by information from the Delta Think Open Access Data & Analytics Tool.

This study utilizes COUNTER usage data from twenty libraries [note: eight libraries are Carnegie Research 1 (or Doctoral Very High Research Activity) and 12 others range from R2 (or High Research Activity) down to small baccalaureate] – all chosen because they had Big Deals with the publishers used in this study. The study used two large publishers with a mix of gold, hybrid, and non-OA titles across a four to five year period (note: 2016-2020 and 2017-2020 respectively).

Using data about those two publishers from Delta Think, we see that open access publication is possible – via either gold or hybrid journals – across 85-95% of the publisher portfolio – slightly higher for Publisher 2 (Figure 1). 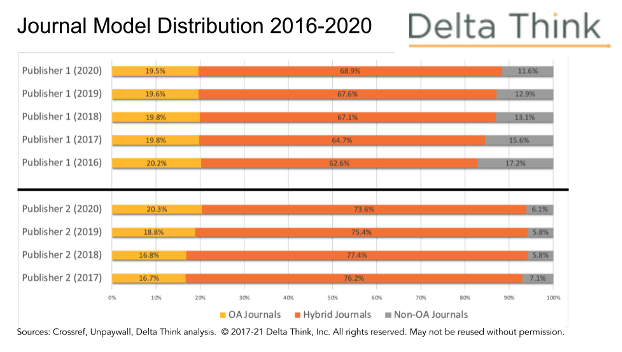 See Also: On the Open Access Road Again: Is the Value of the Big Deal Declining? (via Against the Grain of Charleston Conference 2021 Session, Podcast)
Note: A Video Recording of the Session is Also Available (via ATG)