Survey Findings From Pew Research: “AI and Human Enhancement: Americans’ Openness is Tempered by a Range of Concerns”

This survey looks at a broad arc of scientific and technological developments – some in use now, some still emerging. It concentrates on public views about six developments that are widely discussed among futurists, ethicists and policy advocates. Three are part of the burgeoning array of AI applications: the use of facial recognition technology by police, the use of algorithms by social media companies to find false information on their sites and the development of driverless passenger vehicles.

The other three, often described as types of human enhancements, revolve around developments tied to the convergence of AI, biotechnology, nanotechnology and other fields. They raise the possibility of dramatic changes to human abilities in the future: computer chip implants in the brain to advance people’s cognitive skills, gene editing to greatly reduce a baby’s risk of developing serious diseases or health conditions, and robotic exoskeletons with a built-in AI system to greatly increase strength for lifting in manual labor jobs.

The current report builds on previous Pew Research Center analyses of attitudes about emerging scientific and technological developments and their implications for society, including opinion about animal genetic engineering and the potential to “enhance” human abilities through biomedical interventions, as well as views about automation and computer algorithms.

As Americans make judgments about the potential impact of AI and human enhancement applications, their views are varied and, for portions of the public, infused with uncertainty.

Americans are far more positive than negative about the widespread use of facial recognition technology by police to monitor crowds and look for people who may have committed a crime: 46% of U.S. adults think this would be a good idea for society, while 27% think this would be a bad idea and another 27% are unsure. 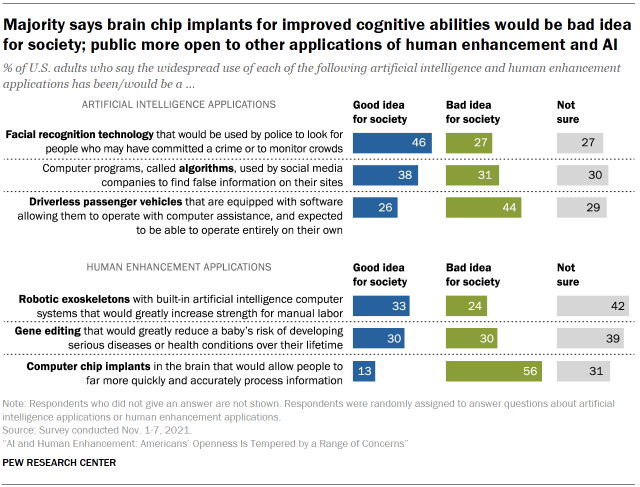 By narrower margins, more describe the use of computer algorithms by social media companies to find false information on their sites as a good rather than bad idea for society (38% vs. 31%), and the pattern is similar for the use of robotic exoskeletons with a built-in AI system to increase strength for manual labor jobs (33% vs. 24%).