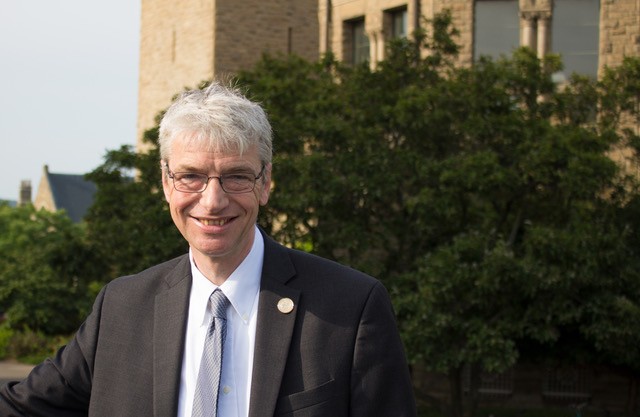 Gerald R. Beasley, the Carl A. Kroch University Librarian, has announced he will not seek to renew his five-year term when it ends July 31, 2022.

Beasley is Cornell’s 12th university librarian. He began his term Aug. 1, 2017 after serving for four years as vice provost and chief librarian at the University of Alberta in Edmonton, Canada.

“Working here as university librarian with such great people and great collections is truly an honor and a privilege,” Beasley said. “Leaving Cornell at the end of July 2022 would mean fulfilling a plan developed by me and my family a while back to return to Canada after five years.”

A search process to identify Beasley’s successor will commence shortly.

“Gerald Beasley has ensured that Cornell continues to have a modern, world-class university library system that remains relevant in the 21st century,” said Provost Michael Kotlikoff. “Thanks to his stewardship during an enormously difficult period, the library continues to be a vital resource for academic scholarship and public access of knowledge with a global reach.”

As university librarian, Beasley oversaw the completion of several innovative capital projects, including the Mui Ho Fine Arts Library in Rand Hall, which creates a collaborative environment for one of the largest circulating academic collections in the Northeast dedicated to art and architecture; and renovation of the Uris Library Addition (the so-called Cocktail Lounge) as a wheelchair-accessible, 24/7 space for Cornell students. Under Beasley’s leadership, an organizational realignment brought Cornell University Press under the oversight of Cornell University Library. The library also launched an expansive archive for Atlantic Philanthropies that gave scholars a detailed look at how the foundation, started in 1982 by Charles F. “Chuck” Feeney ’56, has advanced social change across the globe.