Print book sales in the United States had their best year since 2010. Growth occurred across every major supercategory, including adult non-fiction, adult fiction, juvenile, and teen categories. Unit-sales volume in 2020 rose 8.2 percent, year over year, to reach 751 million units, according to The NPD Group.

“The U.S. consumer book market looks very different today, than it did back in April,” said Kristen McLean, books industry analyst for NPD. “Sales growth came in waves, from the sudden need to educate kids at home, to the super-heated political cycle. All of the additional time people spent at home created a big appetite for reading, including huge spikes in sales of cookbooks and do-it-yourself books, which helped people stay entertained and engaged.”

Growth in print books was led by juvenile fiction, which contributed one-third of all U.S. books market growth. 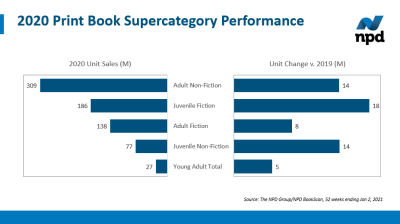 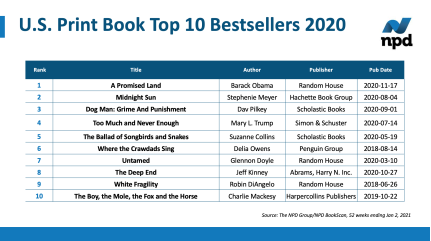 Blueprint for an AI Bill of Rights: A Vision for Protecting Our Civil Rights in the Algorithmic Age (via OSTP: The White House Office of Science and Technology Policy) Lisa ...