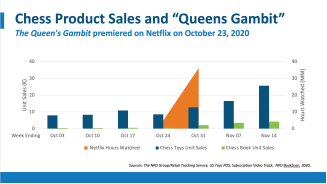 As viewing time rose for “The Queen’s Gambit” miniseries during the three weeks following the series debut on Netflix (NFLX), unit sales of chess sets jumped 87% in the U.S., and chess book sales rose 603%. “The Queen’s Gambit” premiered on Netflix on October 23, 2020 and quickly became very popular. Over the first nine days, total viewing time for the miniseries in the U.S. rose to 40.8 million hours, according to The NPD Group.

“The idea that a streaming television series can have an impact on product sales is not a new one, but we are finally able to view it through the data,” said Juli Lennett, toys industry advisor for NPD. “The sales of chess books and chess sets, which had previously been flat or declining for years, turned sharply upward as the popular new series gained viewers.”

Based on U.S. Retail Tracking Service data from NPD, week-over-week chess set sales in the U.S. had been relatively flat for 13 weeks, only to rise quickly after “The Queen’s Gambit” debuted. A similar rise in chess book sales, was revealed by NPD BookScan, which reported U.S. print book unit sales for the following titles: “Bobby Fischer Teaches Chess,” by Bobby Fischer; “Chess Fundamentals,” by Jose Capablanca; “Chess for Kids,” by Michael Basman; and “The Complete Book of Chess Strategy: Grandmaster Techniques from A to Z,” by Jeremy Silman.