There was greater interest in love and marriage books in the United States in 2019 than in any year in the past five years. In fact, year-over-year sales of books in this genre grew 5 percent in 2019, reaching 1.7 million copies according to global information company The NPD Group.

Based on the latest information from NPD Bookscan, which tracks the U.S. publishing market, the top selling book in this category in 2019 was “The Five Love Languages,” by Gary Chapman. Total lifetime sales of all editions of this book sold in the U.S. have reached 7 million copies. Other top titles include “He’s Just Not That Into You,” by Greg Behrendt (1.3 million lifetime unit sales) and “Act Like A Lady, Think Like A Man,” by Steve Harvey (1.3 million lifetime unit sales).

Sales of love and marriage book sales tend to peak during the November-December holiday season and in February, in the lead up to the week of Valentine’s Day. In 2019 for example, love and marriage books sales were 30 percent over the annual monthly average in February.  “This is a tried-and-true phenomenon,” said Kristen McLean, books industry analyst for NPD. “People return to and recommend trusted titles in this category over and over, making series like ‘The 5 Love Languages’ perennial backlist bestsellers year after year—it truly is the gift that keeps on giving for the reader, author, and publisher too.” 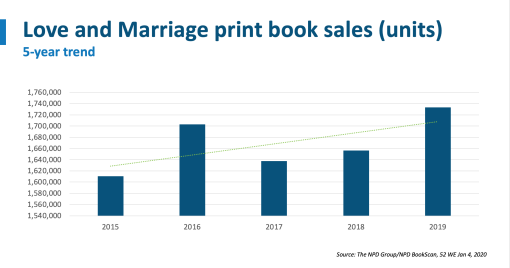