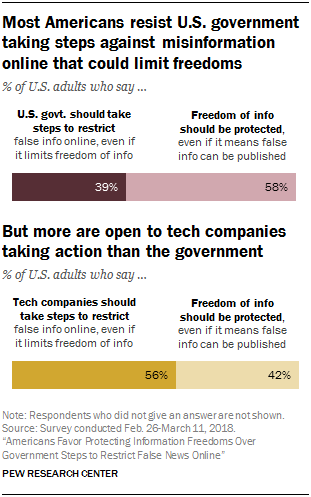 The widespread concerns over misinformation online have created a tension in the United States between taking steps to restrict that information – including possible government regulation – and protecting the long-held belief in the freedom to access and publish information. A new Pew Research Center survey finds that the majority of Americans are resistant to action by the U.S. government that might also limit those freedoms but are more open to action from technology companies.
When asked to choose between the U.S. government taking action to restrict false news online in ways that could also limit Americans’ information freedoms, or protecting those freedoms even if it means false information might be published, Americans fall firmly on the side of protecting freedom. Nearly six-in-ten Americans (58%) say they prefer to protect the public’s freedom to access and publish information online, including on social media, even if it means false information can also be published. Roughly four-in-ten (39%) fall the other way, preferring that the U.S. government take steps to restrict false information even if it limits those freedoms, according to a survey conducted Feb. 26-March 11, 2018, among 4,734 U.S. adults who are members of Pew Research Center’s nationally representative American Trends Panel.
When the same question is posed about technology companies taking those steps, however, the balance changes. More U.S. adults (56%) favor technology companies taking steps to restrict false information, even if it limits the public’s freedom to access and publish information. By comparison, 42% prefer to protect those freedoms rather than have tech companies take action, even if it means the presence of some misinformation online.