Political discussions on social media are a fact of digital life for many Americans. And although some politically active users enjoy these opportunities for engagement, a larger share of U.S. adults express annoyance and aggravation at the tone of the political interactions they witness on social media, according to a new Pew Research Center report.

The survey of more than 4,500 U.S. adults finds that 37% of social media users are worn out by the amount of political content they encounter – nearly double the share (20%) who says they like seeing lots of political information on these platforms. Meanwhile, more than half (59%) describe their online interactions with those they disagree with politically as stressful and frustrating, and 64% say their online encounters with people on the other side leave them feeling as if they have even less in common than they thought. 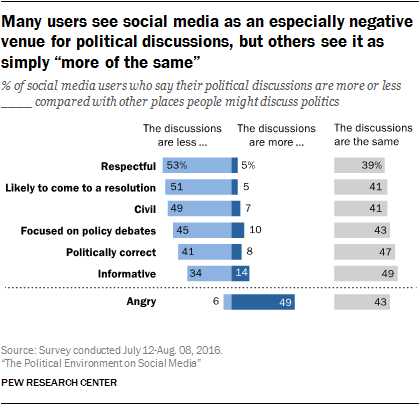 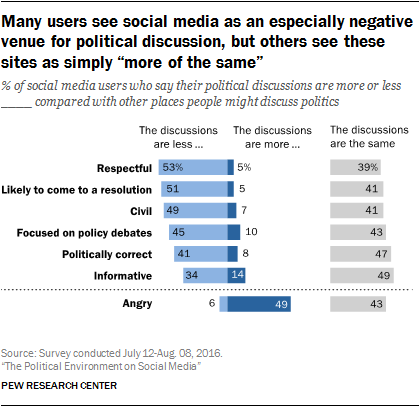 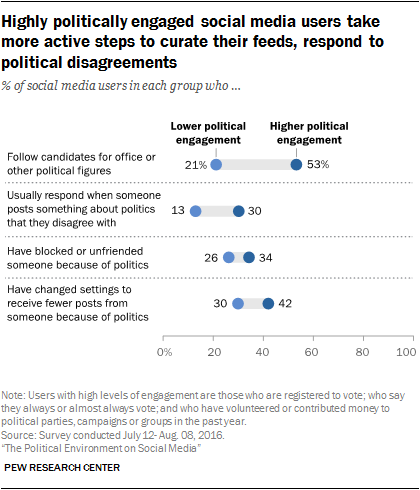 [Our emphasis] Data in this report are drawn from the July wave of the American Trends Panel. The panel, created by Pew Research Center, is a nationally representative panel of randomly selected U.S. adults living in households. They survey was conducted July 12-Aug. 8, 2016, among 4,579 respondents (4,165 by web and 414 by mail). The margin of sampling error for the full sample of 4,579 respondents is plus or minus 2.4 percentage points.