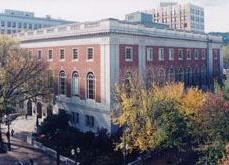 On Sept. 7, 2013, Multnomah County Library will celebrate the 100th anniversary of the iconic Central Library, in downtown Portland.
Central Library was opened on Sept. 6, 1913, under the leadership of Mary Frances Isom during a period of prolific growth and expansion of Multnomah County’s library system.
The beginning of Isom’s nearly 20-year tenure as the head librarian coincided with the library’s commencement as Oregon’s first free, tax-supported public library, open to all. During her time in this role, the library system grew from one single downtown building to 16 locations distributed across Multnomah County, as the population of the county nearly tripled.
The planning and construction of Central Library, seen by many as Isom’s greatest achievement, began years earlier with chief architect Albert E. (A.E.) Doyle. The library was designed and built with the needs of patrons at the forefront, an unusual approach at the time.
Central Library continues to be a unique and highly utilized community asset to this day. Last year, more than 850,000 patrons visited Central Library, checking out or renewing almost 1.5 million items.