From the Official Google Blog:

Government surveillance is on the rise. As you can see from the graph below, government demands for user data have increased steadily since we first launched the Transparency Report. In the first half of 2012, there were 20,938 inquiries from government entities around the world. Those requests were for information about 34,614 accounts.
The number of government requests to remove content from our services was largely flat from 2009 to 2011. But it’s spiked in this reporting period. In the first half of 2012, there were 1,791 requests from government officials around the world to remove 17,746 pieces of content. 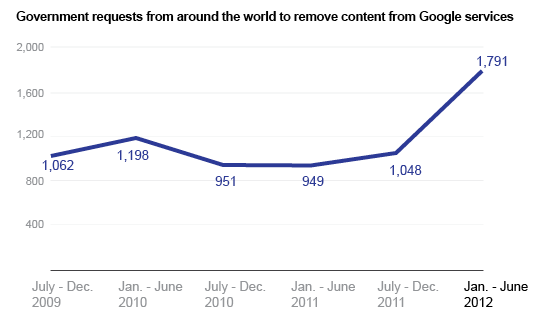 As always, we continue to improve the Transparency Report with each data release. Like before, we’re including annotations for this time period with interesting facts. We’re also showing new bar graphs with data in addition to tables to better display content removal trends over time. We’ve now translated the entire Transparency Report into 40 languages, and we’ve expanded our FAQ—including one that explains how we sometimes receive falsified court orders asking us to remove content. We do our best to verify the legitimacy of the documents we receive, and if we determine that any are fake, we don’t comply.